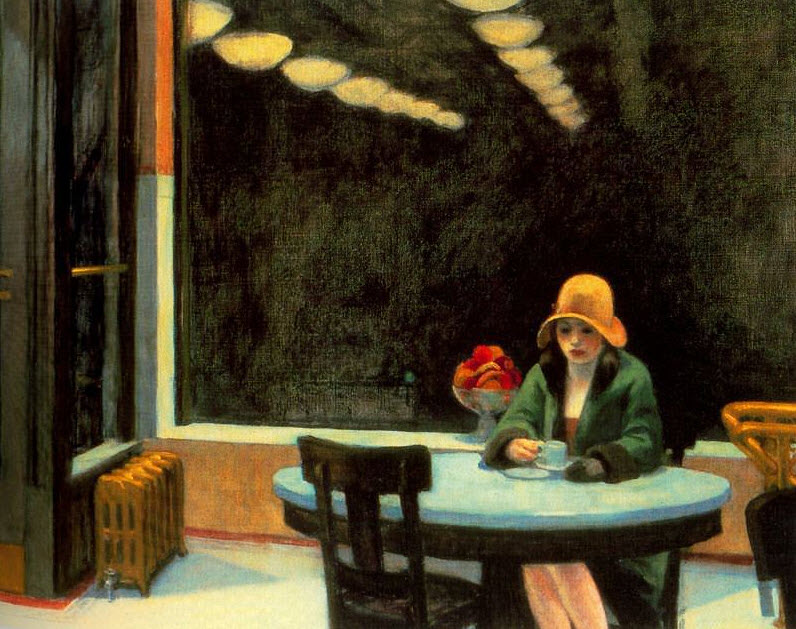 Automat was first displayed on Valentine’s Day 1927 at the opening of Hopper’s second solo show, at the Rehn Galleries in New York. By April it had been sold for $1,200. The painting is today owned by the Des Moines Art Center in Iowa.

The painting portrays a lone woman staring into a cup of coffee in an Automat at night. The reflection of identical rows of light fixtures stretches out through the night-blackened window.

Hopper’s wife, Jo, served as the model for the woman. However, Hopper altered her face to make her younger (Jo was 44 in 1927). He also altered her figure; Jo was a curvy, full-figured woman, while one critic has described the woman in the painting as “‘boyish’ (that is, flat-chested)”.

She has removed only one glove, which may indicate either that she is distracted, that she is in a hurry and can stop only for a moment, or simply that she has just come in from outside, and has not yet warmed up. But the latter possibility seems unlikely, for there is a small empty plate on the table, in front of her cup and saucer, suggesting that she may have eaten a snack and been sitting at this spot for some time.

Hopper would make the crossed legs of a female subject the brightest spot on an otherwise dark canvas in a number of later paintings, including Compartment C, Car (1938) and Hotel Lobby (1943). The female subject of his 1931 painting Barber Shop is also in a pose similar to the woman in Automat, and the viewer’s image of her is similarly bisected by a table. But the placing of the subject in a bright, populated place, at midday, makes the woman less isolated and vulnerable, and hence the viewer’s gaze seems less intrusive.