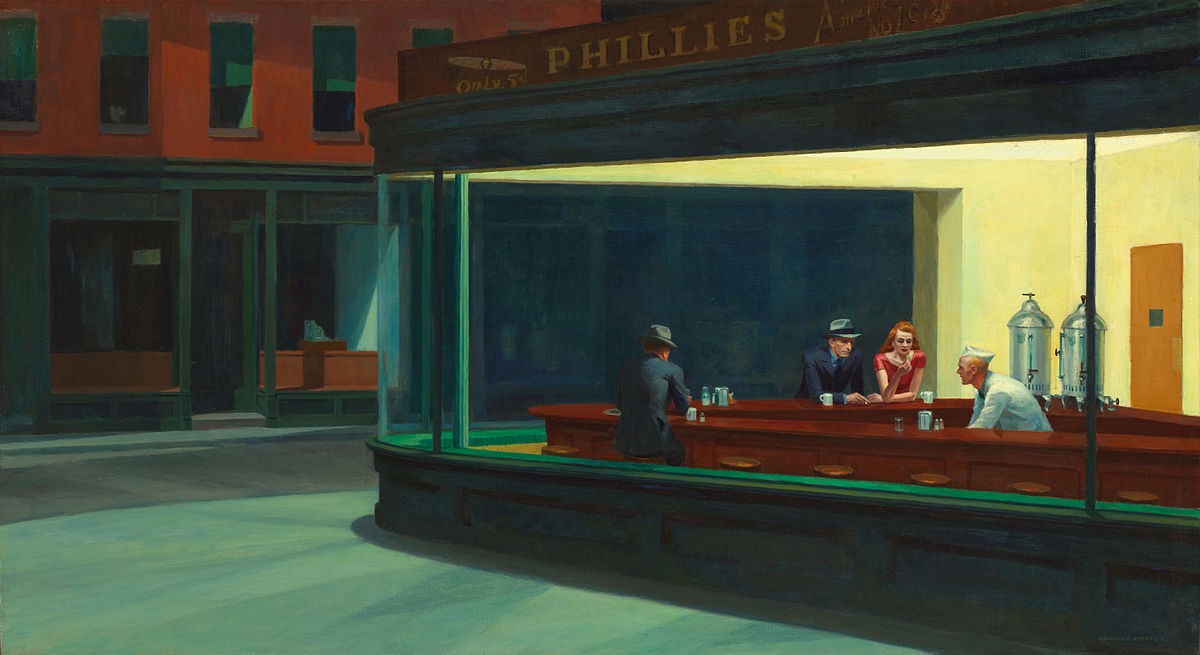 Nighthawks is a 1942 oil on canvas painting by Edward Hopper that portrays people in a downtown diner late at night. It has been described as Hopper’s best known work and one of the most recognizable paintings in American art. Within months of its completion, it was sold to the Art Institute of Chicago on May 13, 1942 for $3,000. Nighthawks seem that it might be small but it measures 33 1/8 inches by 60 inches,  roughly 2.75 feet by 5 feet.

He was cagey about naming the actual eatery, though. His only clue: “[Nighthawks] was suggested by a restaurant on New York’s Greenwich Avenue where two streets meet.”

In 2014, a restaurant on Greenwich Street declared itself Nighthawks’inspiration after a Chicago native wandered in and noted the similarities between the place’s layout and the famous painting. This is how Classic’s Café at 679 Greenwich Street came to change its name to Nighthawks.

In Josephine’s notes, she wrote a description of one of the customers: “Man night hawk (beak) in dark suit, steel grey hat, black band, blue shirt (clean) holding cigarette.” This note suggests that the prominent nose of this patron makes the painting’s title a bit more literal.

In a letter to his sister Marion, Josephine shared, “Ed has just finished a very fine picture—a lunch counter at night with 3 figures. Night Hawkswould be a fine name for it. E. posed for the two men in a mirror and I for the girl. He was about a month and half working on it.”

Based on the similar theme and concentration on the play of light at night, Levin has also proposed that the famous Vincent Van Gogh piecemay have sparked ideas in Hopper. Interestingly, Café at Night was exhibited in New York in January of 1942, right as Hopper was working on Nighthawks. It’s probable that Hopper would have seen Van Gogh’s painting, as his own works were also on display at the same venue.

Many of the artist’s works reflected the isolation that could be felt amid the bustle of New York City. Of Nighthawks, the New York native said, “Unconsciously, probably, I was painting the loneliness of a large city.”