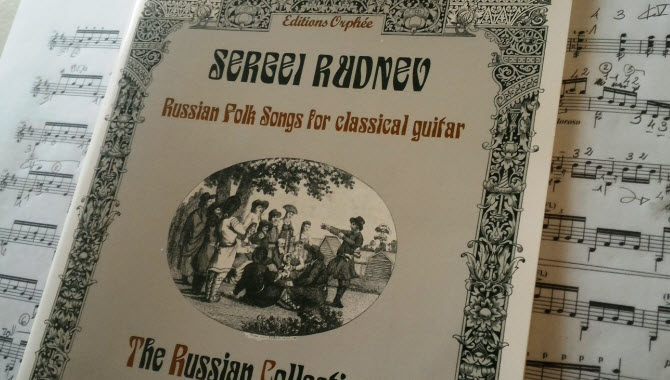 “The question arose on several occasions on how one should approach the performance of music based on Russian folklore. As we know, Russian folk songs have been used by Russian composers since the late 18th century. Surely, if one wants to get an idea on how to perform a guitar transcription of, for example, the Russian folk song U Vorot, Vorot (At the Gate, Russian Collection Vol. I) one could do no worse than listening to a good performance of Tchaikovsky’s 1812 Overture where the song is featured as one of the main themes.
In our case, Sergei Rudnev’s arrangement of The Old Lime Tree, it is difficult to find instrumental works where the song has been used. This particular arrangement, for it is an arrangement and not a literal transcription, was first recorded by Vladimir Mikulka, even before we published the music. Since then, it has been recorded and performed numerous times by several guitarists. Unfortunately, few performers, even some Russian guitarists, seem to understand the cultural background of this music.
So what I am going to propose here is a listening to a vocal rendition of this song, as sung by one of the most important singers in Russian history, Ivan Kozlovsky, here accompanied by the equally well-known guitarist Alexander Ivanov-Kramskoi.
Link: http://www.cristianoporqueddu.com/ARCHIVE/lipa.mp3
Obviously, this rendition, sung by an operatic voice, is not in itself an authentic representation of the folk spirit of the song. The point I am trying to make here is that one should not try to emulate Kozlovsky’s tempo, which is much too slow for an instrumental version, but try to emulate his phrasing, the varying dynamics in each stanza and the rhythmical freedom he takes.
There are several genres in Russian folklore, and the Preface to the edition discusses them at some length. The Old Lime Tree belongs to the protiazhnaia (long drawn out) genre, and should be treated differently than other songs belonging, for example, to the khorovod (dance) genre. In protiazhnaia music, time signatures and bar lines are a convention imposed on this music by Western standards. They do not belong to the Russian tradition here and can be safely ignored.
Note: The recording from which this is taken is a 10″ LP produced by Melodiya in the early 1950s. Natalia Ivanova-Kramskaia, the guitarist’s daughter, gave me a copy of it many years ago. Used by permission.”
– Matanya Ophee (1932-2017)